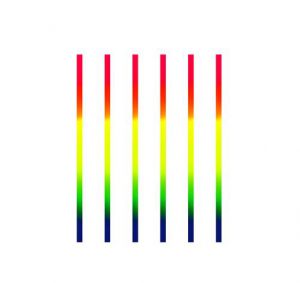 The rainbow is an element with meaning that also reflects the artist’s
open-minded view of the world, that every single person on this planet
carries the same important value as another regardless of race, color,
religion, who we love, wealth, and education. Every person is equal on this
beautiful planet.

The rainbow is an element which came up in the development of Fabian
Freese’s minimal artworks, starting with monochrome color fields where he
faded two colors together, such as blue with green. Freese then started to
add more hues into these sprayed fadings using bright neon shades to get the best color effect.
The rainbow appeared as a coincidence in the process of his art
and now Freese works with it like a single pigment.

“Rainbow Inside” stands as a reflection of Fabian Freese’s feelings and
point of view that have developed from his travels around the world. The
rainbow installation will also include photographs that will allow visitors
to experience Freese’s interpretation of place within the scope of
juxtaposing but complimentary colors.