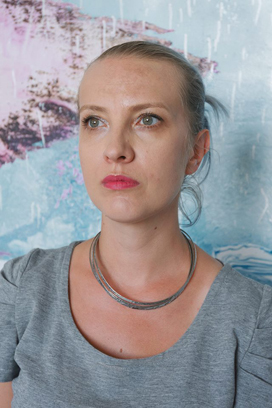 1980 born in Wroclaw, Poland.
Lives and works in Warsaw.

Izabela Chamczyk graduated in Painting from the Academy of Fine Arts in Wroclaw, Poland. She is a painter and performance artist, a process-based rebel. Working in versatile media she constantly redefines their boundaries; emotions are essential element of her idea of art. One of her famous projects was the Twelve-Months War, realized in 2013. The provocative action explored the issues connected with the place of the artist in the art market and in the circles of cultural institutions, searching for active space, recognition for her own art: an Amazon in struggle for the artistic space and its perceptional value.

Chamczyk was twice awarded with scholarships by the Minister of Culture and National Heritage. She is also a finalist of some of the most prestigious competitions in Poland, including the 10th Geppert Competition in Wroclaw, 6th Triennial of Young Artists in Oronsko and a Vordemberge – Gildewart competition in MOCAK. She has had numerous solo exhibitions and participated in dozens of group shows, for example: SCC Gallery in Isfahan, Iran, the Entropia Gallery in Wroclaw, Poland, the GSW in Opole, the BWA in Zielona Gora, the Centre for Contemporary Art in Torun, the Festival in Sokolowsko, the ERARTA in Sankt Petersburg etc.

Her works are in many private and public collections in Poland and abroad.